Graduates of Texas A&M University School of Law, Andrew Goodwyn and Holland Hendley, are demonstrating the strength of the Aggie Network by practicing law 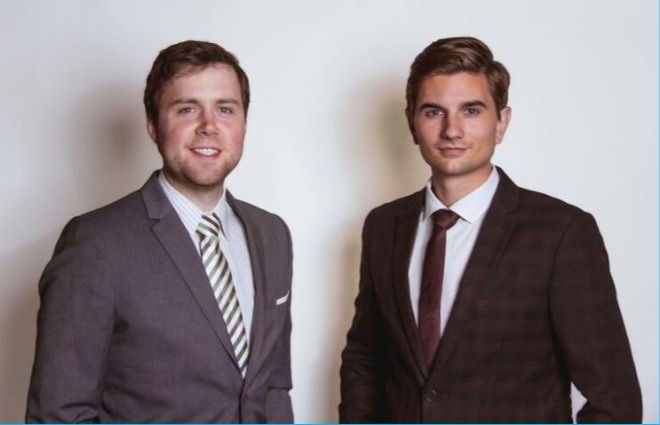 together at Hendley & Goodwin LLP in Nashville, TN. Their firm specializes in advancing businesses and creative projects with establishing a solid, legal foundation. Serving the business and entertainment communities, the firm looks to attract clients that range from being in the idea phase to operating fully.

Native Texans, Andrew and Holland profess a love for entertainment and are convinced that there is a need for honest and ethical representation for artists. Learn more about these entrepreneurs and intellectual property professionals, in their words.

A Texas native, Andrew received his bachelor’s degree in Fashion Merchandising from the University of North Texas and his law degree from Texas A&M University School of Law. Andrew’s interest in the entertainment industry began at a young age when he started modeling with the Campbell Agency in Dallas. He modeled and apprenticed for a model management company, shooting photography in the Dallas World Trade Center and volunteering at the annual DIFFA fashion show raising awareness for HIV/AIDS.

The various artists and performers he met during his modeling career, including his talent agent, inspired him to pursue a career in the business side of the entertainment industry. Upon doing so, he became convinced of the need for honest, ethical representation for artists in all fields of entertainment, leading him to practice law and specialize in intellectual property.

Andrew is passionate about competitive video gaming and the players involved in Esports, and works to educate them on the complexities of being a professional athlete. He is sensitive to the fact that sitting down with an attorney can be intimidating. This is why he works to provide his clients with the most comfortable experience possible. He wants them to know that he will help them achieve the best results and will be there for them in the bad times and the good to lend a helping hand.

Holland is a graduate of Belmont University and Texas A&M University School of Law. Growing up in the South and playing guitar, he developed an appreciation for music. This inspired him to stake his future on it by moving to Nashville to pursue a career in music. As an undergraduate at Belmont, Holland studied music business and developed roots within the music community by gigging locally, working within recording studios and working for the performing rights organization SESAC. While in law school, Holland focused on performing outreach within the arts and music community in order to heighten awareness of the legal issues that creative individuals face.

As an attorney and counselor, Holland advances the interests of his clients by advising them on trademark registration and brand protection, copyright monetization, digital technologies and conducting business on the Internet, as well as legal issues that are inherent in the entertainment and business world. Using his skills as an advocate and drawing from his rich professional experience, Holland is adept at negotiating a variety of deals in order to craft creative solutions that benefit his clients.